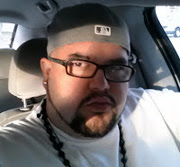 After fighting Cancer for almost three years his mother has got really ill recently, and he's decided to leave the show for an extended period of time to be with his mother. We all at Skywatchers Radio wish him, and his mother all the best. He said he didn't think he would return to the hosting chair anytime soon as his mother is very very ill.

Taking over as the main hosts on the show is Crystal Storm, and Alan Wyler. Together they will be joined by Chris Brown who will continue to bring ufology news from around the world. Danny Benton has been promoted to show executive producer.

Once again we wanted to wish Angel and his mother all the best, and hope he's with us here again soon.
Posted by PSN RADIO at 9:48 PM